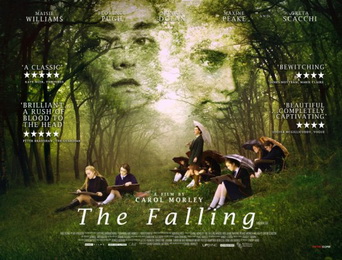 Beginning with the opening stanza of Wordsworth’s ‘Immortality Ode’, The Falling is a filmic re-imagining of the poem’s key themes of childhood and sublime Nature. The film’s lyrical style and emotional intensity pay homage to a Romantic aesthetic, and it’s well worth reading the poem as a companion piece to this enigmatic drama.

In it, Wordsworth espouses the notion that our souls go to sleep when we are born; a sleep which deepens as we progress into adulthood, making us forget the heavenly world from which we came. Children (not adults) are therefore the greatest seers, because their memories of “celestial skies” are the freshest. As Wordsworth puts it, “Heaven lies about us in our infancy”.

The Falling focuses on young women on the brink of adulthood and the events which take place serve to contrast youthful intuition and exuberance with staid adult rationalism. At one point, the adults are directly referred to as being “asleep”, most likely in the Romantic sense of the word.

Set in an all-girls school in 1969, The Falling focuses on a small group of girlfriends at the epicentre of an inexplicable outbreak of fainting. Fainting, or ‘swooning’, was de rigeur in the Romantic era as an expression of honest emotion. The Romantics placed a high value on feelings; art and literature should, they believed, be free expressions of emotional exuberance, unconstrained by the rigidity of classical aesthetics. In The Falling, the psycho-sexual awakening of the female protagonists similarly represents a break from traditional mores and (old-) school values.

The fainting episodes disrupt the school’s decorum, as one by one the girls fall into phantasmagorical ecstasies. The exact cause of the fainting is never explained, but the episodes often precede moments of heightene
d emotion or remembrance, bubbling up from their unruly subconscious. The film’s climax – a scene in which many of the girls faint during a school assembly – is wonderfully choreographed to resemble a kind of chaotic, sexy tableau one might see from the Romantic period, say Delacroix’s ‘The Death of Sardanapalus’. 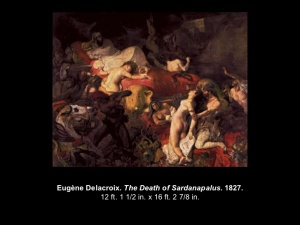 Few concepts are more important to the understanding of Romanticism than the sublime. Aesthetes and writers of the era saw the natural world and its wild, mysterious expanses as a gateway to the experience of the sublime. The sublime being defined as:

A quality of art or experience that “excites the ideas of pain and danger” that produces “the strongest emotion that the mind is capable of feeling” and that causes “astonishment…horror, terror.” (Edmund Burke).

So, too, in The Falling, Nature is depicted as tranquil but also – during the final sequence in which Lydia climbs an oak tree – terrifying. Scenes of the natural world punctuate the film and are often spliced into the fainting episodes, as though the girls are connecting afresh to the organic rhythms of the natural world. Primordial nature is rigorously contrasted with the regimes and discipline of the school. Nature becomes their better teacher.

In his essay on the sublime, Wordsworth comments that the “mind {tries} to grasp something towards which it can make approaches but which it is incapable of attaining.” In trying to grasp at this sublime idea, the mind loses consciousness, and the spirit is able to grasp the sublime – but it is only temporary. When viewed through the lens of Romanticism, loss of consciousness (fainting) is a positive, albeit temporary, moment of liberation from the burdens of adult responsibility – a step into the sublime.

For the girls in The Falling, however, the sublime is more closely experienced through sexual experimentation. After fainting, even Susan, the most sexually innocent of the girls, goes on to quickly lose her virginity, whilst the main protagonist, Lydia, makes a dubious foray into incest. Of course, the film is set in the 60s, an era of increased sexual ‘freedom’, and the Director may well have simply wished to allude to this wider social context. Certainly, the revelations which come thick and fast in the film’s denouement draw attention to the ways in which sex can entrap as well as liberate.

The Falling is populated with an almost entirely female cast and the acting is unanimously brilliant. The many close-up shots make for mesmerising viewing as we are invited deep into the girls’ circle of friendship. Maxine Peake is simply stunning as Lydia’s near-silent agoraphobic mother who chain smokes her way through each scene, and whose deep sadness finds outlet in the most succinct and heartbreaking of lines, “I used to have hair your colour once.” The film also benefits from a soundtrack by Everything but the Girl’s Tracey Thorn which embodies the lyrical, skewed quality of the film. The Falling is completely different in style to Morley’s excellent true-life documentary film Dreams of a Life, although both centre upon female enigmas.

iThere are no comments

Begin typing your search above and press return to search. Press Esc to cancel.